Whistlers in the Garden

Great excitement in our house! Three days ago I chanced to see a Golden Whistler in out Viburnum opulus. Now we haven't seen a Golden Whistler here for a number of years, but there was this beautiful little fellow, whistling his head off and showing off, flying from the Viburnum, around the granny flat, under the veranda and landing in the Buddleia. Then reversing the process.

Naturally I ran for the camera and he continued his exhibition while I madly tried to capture him on camera. After 10 minutes he left and I waited in vain. 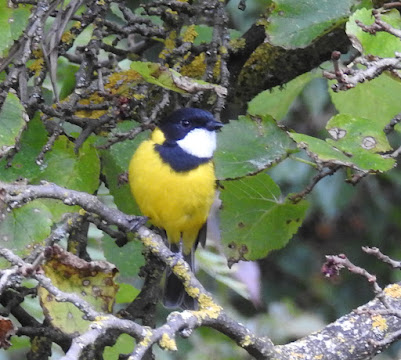 Next morning he was there again, same time, same place, repeating his display  of the previous day and whistling his little head off. This time he actually perched on the arm of a steamer chair on the veranda. I thought I could detect a softer answering call, but there was no sign of another Whistler. Again, after 10 minutes he disappeared. 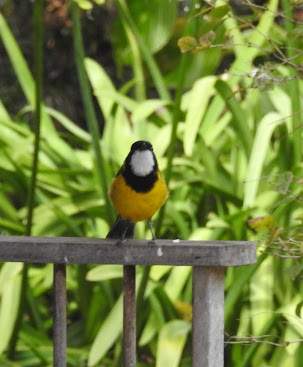 I didn't see him at his appointed time this morning, so I got on with my task of cleaning windows. Then, an hour later, I heard his song and this time there was a definite answer. I snuck up on the Viburnum and was lucky enough to catch sight of his plain brown little girlfriend hiding in the leafy canopy - too well hidden to get a photo of course.

Three days in a row! What will tomorrow bring. It is mid-Autumn here and as we have had a mild season, the trees are very slow to colour up and lose their leaves. So what is going on? Surely it is too late to start nesting, though the Little Ravens nearby are collecting twigs for a nest and we have young Red-browed finches being fed on the lawn. I guess we will just have to wait and see what our beautiful visitors are up to. 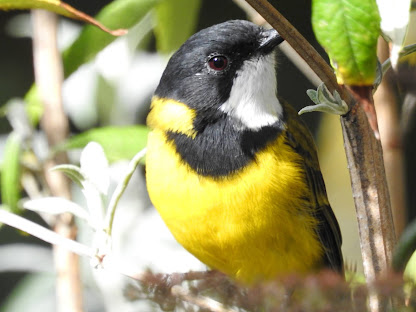 A bit of background information. Golden Whistlers are fairly common but usually live in forested areas with thick understorey and closed canopies. They are conspicuous and noisy at the beginning of the breeding season which is from August to January. We live in an area surrounded by grape vines and grazing paddocks, although we do have an extensive garden of shrubs and trees hence our surprise at the visit which hasn't happened for years.