Today my second daughter, Mandy, published a blog to advertise her lovely hand made jewellery. From being a child who was totally uninterested in craft work of any kind, she has as an adult, tried all manner of crafts and is in fact far more creative in her thinking than her mother who has been a crafty since she was about 4 years old.

Now she is launching her jewellery in the hopes of making something from her hobby. Go have a look at her blog. She'd love some feedback. You'll find her blog site under "My favourite Blogs" - mainly because I haven't yet learnt how to add a link.

Have now finished the binding on my third quilt this year - a Dresden Plate friendship quilt. I've had the blocks for a number of years and finally have the quilt finished. Photo later. One more quilt to finish before the Retreating Angels Quilt exhibition in March. Watch this space for details.

Oh dear!! I have been tagged twice. Does that mean I have to find 14 weird things about myself. I'm not actually that weird - rather mundane in fact, so I'll just stick with the 7 facts,

Here are the rules:

1. Once you are tagged, link back to the person who tagged you.
2. Post THE RULES on your blog.
3. Post 7 weird or random facts about yourself on your blog.
4. Tag 7 people and link to them.
5. Comment on their blog to let them know they have been tagged.

I bet everyone has been taken by now!!

1. I have no desire to retire. I love working. (People tell me that is really weird)
2. My best party trick is standing on my head.
3. I like to take a long hot bath with a glass of wine and a book very late at night.
4. I always tear off a 3 piece length of toilet paper and very neatly fold it into 3.
5. I rarely leave the house without applying my mascara.
6. I have a thing about pens. I only ever use one type - a uniball micro tip.
7. My husband couldn't think of a single weird thing about me. 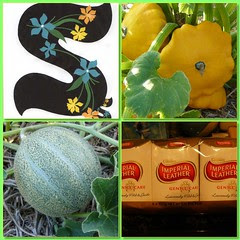 Scatterday S
Originally uploaded by lulubelleliz
Oh dear!! Last minute rush. Haven't had a spare moment this week to think about Scatterdays. Thank heavens we have a garden!!

Golden - golden SQUASH. We have some growing, but we forgot to pick them in time, so they have , like Topsy, just growed.

Itchy stuff - SOAP makes me itch. Any sort of soap. I itched and came out in a rash as a baby and I itch now. In fact if someone could find a soap that doesn't make me itch, I would be eternally grateful!!

About 6.pm today I logged on and immediately realised that I had not done my Scatterdays. I had in fact been busy marking assignments and madly sewing down bindings on my quilts for the Retreating Angels exhibition in March. (BTW if any one wants raffle tickets for the celtic quilt, let me know). I quickly unearthed the camera and raced out into the garden - the very dry, half dead garden. Luckily there are a few things surviving in the veggie garden so I was able to get some photos.

My poor garden is suffering. We have lost our glorious Waratah, several rhododendrons, two flowering currants, a dogwood, a number of banksias and melaleucas and numerous perennials. Amazingly the roses, camellias, magnolias and hydrangeas are hanging on - but for how long, I cannot say. Surely we must get some rain soon? All I can water in the time allowed are the tree ferns and small stuff close to the house. It is indeed heartbreaking and I really feel for the oldies who only have their precious gardens to keep them going. My mother would have been devastated, but stoical.

I am praying for rain!! 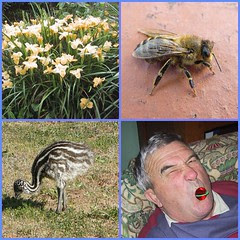 Scatterday I
Originally uploaded by lulubelleliz
Had to think about this one - at the last minute as usual.

Yellow - Irises from the garden. They are actually more yellow than this photo shows.

In the air - Insect. Well it was in the air, but I had to wait until it landed before I could actually photograph it. I did try, but went dizzy trying to track it as it was flying.

PS. Having dragged my Civil War quilt everywhere for the last week and harassed all my friends, the voting shows that the green border has the nod, much to Don's disgust as he loved the red. However, when I tried the red on all four sides, I had to admit that it did overpower the quilt. So, unless some of the original red border magically appears, it looks like it will be green. Thanks everyone for your input.
Posted by Liz Needle at 9:11 PM 6 comments:

Nearly there with this BOM that I have agonised over. A few weeks ago I was asking if anyone knew where I could get some red and beige stripe from the Nancy Kirk Civil War range. No luck with the red, but I was able to get some of the stripe in green, but somehow it lacks the zing of the red in the original.
I have found another red though and this may do instead. Have a look at the photo and tell me what you think. The quilt has a strip of the red on the left and the green on the right. Which one??? Thge colours in the photo are not as rich as they are really - had to use the flash to get a clear shot, but you get the idea. 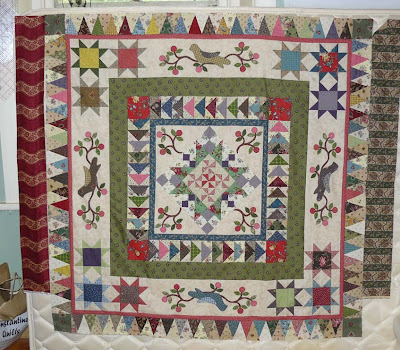 Stars in My Garden 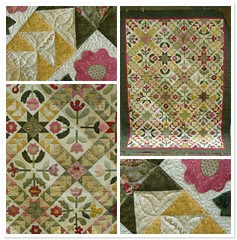 Stars in my garden
Originally uploaded by lulubelleliz
Finally, the quilt is finished and I am really pleased with the result.

The pattern is a design by Lori Smith. I have hand appliqued and machine pieced the top and it has been beautifully machine quilted by Tracey Browning of Constantine Quilts.

It is huge - far longer than the height of my veranda as you can see. And who is it for, I hear you ask? Moi!! I am even going to paint my blue bedroom gold or green so that it will feel more at home.

Liz - feeling very satisfied with herself.
Posted by Liz Needle at 4:35 PM 1 comment:

Scatterday Z
Originally uploaded by lulubelleliz
Well, I nearly didn't make it this week. First week back has been hectic to say the least and late Friday night I decided that I would have to give Scatterdays a miss. Then I had second thoughts and sat down with my trusty Websters and discovered that i wouldn't even have to leave home to find any number of Zeds.

I must admit I did get a bit carried away with my own cleverness, but just had to include these piccies. I did leave some obvious ones out though - like zucchinis of which we have an overabumdance at the moment.

Zebra that I saw at the Zoo when I patted the cheetah.

Zilch - a photo of nothing and a Zero

insect Zapper and of course a Zipper

Zits - a comic strip I just love and Zodiac sign

Zecchinos (sequins) that I Zoomed in on and Zinc cream, beloved of our cricket teams.

I thought about Zabaglione, but I had no Marsala left and a Zig Zag stitch and orange Zest and Zinnias and a Zebra crossing, but figured i had done enough showing off for the day.

Now back to school work - the Zenith of my priorities at the moment.