My school - Lobethal Primary School has just celebrated its 150th birthday this last weekend. We have been planning this since late last year and working flat out to get the weekend organised. Now we can all breathe a sigh of relief. It was a great weekend and many memories were revived by many people.
Friday was an Open Day for the school. We teachers conducted classes in the 3Rs and other activities from a bygone era. You may remember things like Friday tests - Spelling and Dictation, Mental and Arithmetic. We had handwriting lessons - copperplate if you don't mind. I really had to brush up on that - geography mapping, handcrafts like potato printing, finger painting, cross stitch on gingham, games like marbles, Ludo, draughts, Chinese Checkers, Snakes and Ladders, Hopscotch and of course Jump Rope. Great fun and the old scholars who visited enjoyed their day back at school. Some of them had attended 70 years ago. 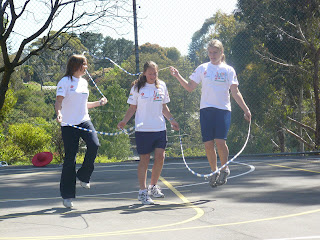 
On Saturday there was a supper dance for the younger ones. Wonderful supper, just like the old barn dance suppers in the 50s and 60s - plates of sandwiches, pickled onions and gherkins on toothpicks, party pies and pasties, baby frankfurts - little boys - asparagus rolls, fairy cakes, cream puffs, meringues, brandy snaps, lamingtons and so on.

Then on Sunday the Family Picnic and Roll Call. And the oldies turned up in droves with their photos, memorabilia and stories - so many happy memories. A wonderful day and well worth the hours and hours we put into the organisation - but I am glad its over and won't have to be repeated for at least 25 years - and it won't be me doing it then!! 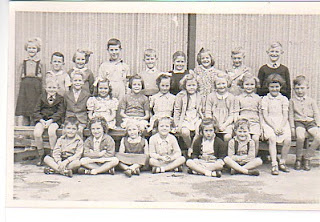 Back then - early fifties 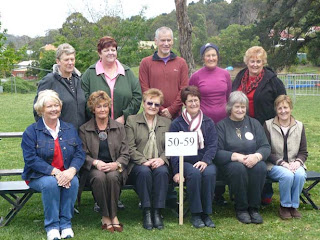 
Liz Needle
Posted by Liz Needle at 10:19 PM No comments: 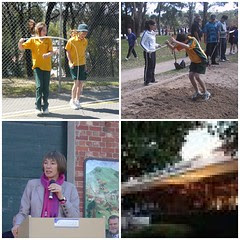 Scatterday J
Originally uploaded by lulubelleliz
Finally catching up after my computer disaster. Except for the blown up printer, all seems to be going smoothly - though I know it's tempting fate to make comments like that.

'J' - hmmm. I found this difficult. I knew what I wanted to photograph, but couldn't find the opportunity to take the photos. I'll show you what I did get .

Sport - Jump Rope for Heart jump-offs - just one of the many things I have had to cram into the last 2 weeks. And also James jumping in the Long Jump. I had wanted to photograph the javelin being thrown!

Restaurants - there are only 2 'J' restaurants in Adelaide - 35 kms away. Here is the only photo (a very poor one) I could find - Jolley's Boathouse Restaurant. The other one is Jasmin Indian Restaurant.
Posted by Liz Needle at 10:17 PM 2 comments: 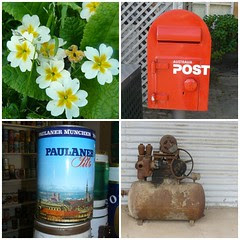 Scatterday P
Originally uploaded by lulubelleliz
Finally back online after a monster computer crash. Missed the "P", and as I didn't want to miss out, I am doing it today - only 6 days late.

Sweet things - primroses in my garden. Just the most beautiful perfume and such sweet little flowers.

Metal - Pauland Pils in a metal can and a very old metal pump both of which I found in a pioneer village we visited.

We have had a very hectic first week back at school - more next time, but it was capped off by the crashing of the computer. We decided that there was so much hidden stuff buzzing away after 10 years that we(my computer geek and I) decided that a total cleanout was in order. Sounded good. Get rid of the junk, save and re-install my documents , favourites, address book etc - all the things I really need. Of course I would have to re-install all the software and printers etc, he told me. No problems, says I. Done it before, says I.

Computer came back yesterday - everything working so much better. But, couldn't get online. Had to re-install something or other. Could I find the CD ? Yes!! Three hours later!!!

Then the printer - wouldn't plug and play. No way. Had to be done another much more complicated way!! And when I finally got it ready to go, tried to print and the b....y printer blew up!!!

OK - now for the scanner!! For some reason it would not install. Needs new driver or some such!! All sorts of weird messages. Computer man out for the night!! I gave up. Who needs a scanner right now anyway.

So far all the other stuff seems OK. But I didn't need all that last night when I had 6 dozen biscuits to make for morning tea at school and a whole day of special lessons to plan for our 150th birthday Open day. But, I survived, the biscuits were a hit and the kids and the old scholars enjoyed the day
Liz
Posted by Liz Needle at 10:54 PM 2 comments: 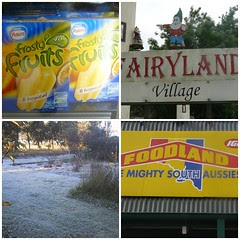 Early this week, but we have a busy day tomorrow.

Signs - a couple of local ones. Fairyland - yes there really is a Fairyland, Virginia. Mosaic maker didn't like the F.
And of course Foodland - chosen more for the Mighty South Aussie bit than for anything else.

Elements - Frost in our garden.

Had a lovely surprise today. One of my ex-students from 35 years ago rang last night to say she was in Lobethal and could she come and visit. She was one of my favourite students ever and as she was a very good athlete and sports mad, I was her favourite teacher.
That was back when I was a young Phys Ed teacher and coached Athletics, Hockey and Softball as well as teaching Phys Ed and running vacation swimming. Val was a top athlete and a very good hockey player.
Nice when kids - well, she's nearly 50 now - remember you and make contact. Makes teaching very worthwhile. 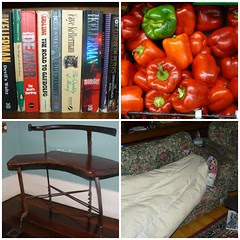 Scatterday C
Originally uploaded by lulubelleliz
Finally have myself back on task with the last Scatterday photos. Could have done several sets for C, but here are my final selections.

Hobby - Crime fiction. If I'd had more time I might have looked for C authors, but these will do.

Furniture - a funky chair made from parts of an old carriage and a couch containing a couch potato (also a chef) who wished to be anonymous.

I'm having a lovely time in Sideny (apologies girls from Sydney. I can't resist. I once taught a kid (a girl called Sideny Fridd - as true as my name is Liz) who was so called because her mother loved to holiday in Sideny. I hope she doesn't have access to the internet!!) Any way I am thoroughly enjoying my holidays with the grand daughters. Wish I could send photos, but DD has a thing about her kids appearing on the internet - and fair enough. I will post some photos to the cows when I get back. I think that will be OK.

Today we did the swimming bit - a regular daily thing during the school hols. The instructor did threaten to kick my youngest grand daughter out of the class if she didn't stand still and listen!! For heavens sake!! The child is only 3!! I taught swimming and ran a pool with 600 children for more years than the instructor has lived and if she can't cope with one lively, intelligent and totally bored child, then she shouldn't be teaching. She's lucky I didn't leap into the pool and biff her. I have watched the classes and honestly I think they are the most uninterested, bored lot of teachers (no, instructors) I have ever seen!! If they had been working for me - they wouldn't have a job by now!!) You have to make lessons interesting and fascinating for kids (yes, even swimming) and these young instructors missed the boat entirely.

Off my hobby horse. I have very definite ideas on teaching and think I know what I am talking about. I am still teaching after 45 years and the kids still enjoy it - even Maths!!!! Shut up, Liz!!

We went to Fox Studios and spent time painting plaster models - even me, riding the Merry go Round, jumping in the bouncing castle, exploring toy shops, buying Christmas decorations, going to the movies, cleaning bedrooms, reading stories, dressing up, making gingerbread men - all the Nanna sort of stuff I have to catch up on. Just delightful!! Home again tomorrow with lots of lovely memories and the knowledge that they will all be in Adelaide in December, sleeping in my sewing room, hogging the TV, terrorising the dogs, cooking gingerbread houses in the kitchen, decorating the Chrissie tree, wrecking the garden, trashing the house and twisting Don and I around their little pinkies!! Lovely!!

Catch you all when I get back home.

May be a bit late this week with my scatterdays. I am flying off to Sydney tomorrow - Saturday - to see my little darlings. Sorry guys, but my time in Sydney is all too infrequent and very precious. 3 or 4 days twice a year and every minute spent in catching up with my grand daughters - and that time not nearly long enough. I never thought I would become so totally hooked on little kids, but there you are.
One day I promise I will make time to catch up on Sydney friends, but not this time, alas. Only 4 days. Not enough time to even find out how much improved is the reading, how kinder is going, how far we can now swim, what we have learned in ballet and gymnastics, how many tricks the dog has learned, who loves who and who has kissed who, what new clothes we have and who are now the best friends and who is no longer on the friends list.

Back in 4 days. Catch up with everyone then.

Check out my Slide Show!

My friend Pennie posted some lovely photos of her garden, so I thought I would show you what my garden looks like in Spring.