Will it ever end??

Disaster follows disaster. We have had a night and now a day of steady rain, which is very welcome, but along with the rains we have had high winds as well. One of the trees along the driveway shed a large limb this afternoon, narrowly missing Don's little truck. Then, as we sat having tea, we heard a crack and a thump outside and went out to find a large limb of the old willow across the lawn. We have many old willows that we planted 35 years ago to take up the water in the side paddock which is always a bit of a bog. They looked lovely for a long while but as they have aged, they have become top heavy and brittle. During the last few years they have begun losing limbs on a regular basis. In fact the side paddock looks a lot like a bomb site.
So I wasn't too fussed when the willow came down. However 10 minutes later there was another crack and a thump and we went out to find a large limb had fallen from the claret ash, just missing the outdoor table and the chiminea on the patio. This was starting to be a worry. Five minutes another limb down, but by now it was getting dark and we couldn't see it, so we assumed it was one of the willows in the paddock. Since then there have been at least 6 loud noises and thumps - I wonder what we will find in the morning!! Hopefully they will all be willows, but at some stage we are going to have to get a tree expert in to clear the willows as they are now a tangled mess of limbs and far too big and dangerous for us to do anything about.
Lesson to be learnt - don't plant willows!!!
Liz
Posted by Liz Needle at 9:36 PM 1 comment:

Strolling around the garden a fortnight or so back, noting all the work I had to do to clean it up, when I noticed that our beautiful big shrub rose 'Fritz Nobis' was not looking well. This 20 year old rose has been my favourite ever since it was planted and the sight of it not looking well was somewhat of a worry. Looking further along the garden bed, I noticed that a few other shrubs were looing yellow and sicjk. Curious? We had just survived 3 very dry summers and I had been amazed at how well the roses had survived, but this one was looking very sorry for itself, despite a mild wet winter.
I mentioned it to Don and he came out to inspect the plants. Then, he apologised profusely, almost on bended knee!!! And all became clear. A few metres up from the rose, was a flowering prunus which for some years had a blackberry coming up through the middle and we had been unable to get rid of it. Don had decided to cut the blackberry right back and put some poison on the cuts. Normally he is very careful and paints this stuff on with a brush with no problems in the past, but he discovered that he can adjust his sprayer so that only one drop comes out, so he decided to do it this way for a change!!!!!!
Not only did he kill the blackberry very successfully, but he also managed to kill everything within 5 metres all around the darn blackberry!!! He then admoiitted that he had done the same for another large blackberry at the front of the garden. We checked. Sure enough, the trees and shrubs in the vicinity were also long sick, but not as badly affected as the first lot.
Needless to say he has been banned from using this poison anywhere in the garden!!! And we have learnt a valuable lesson. 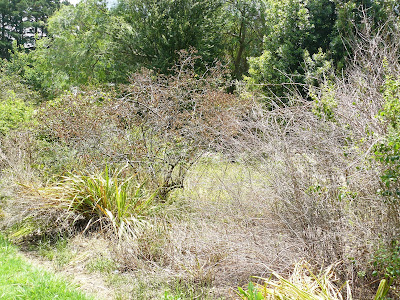 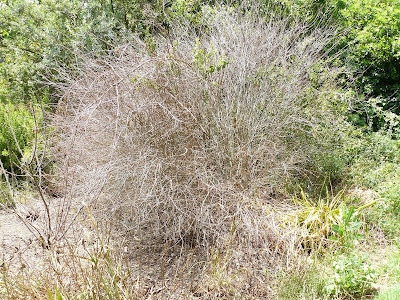 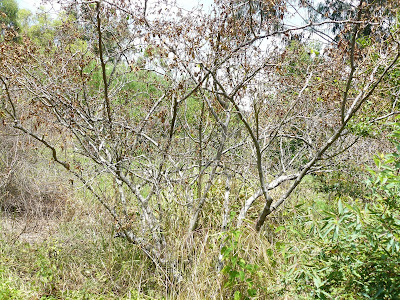 And here is my beautiful 'Fritz Nobis' in happier times. 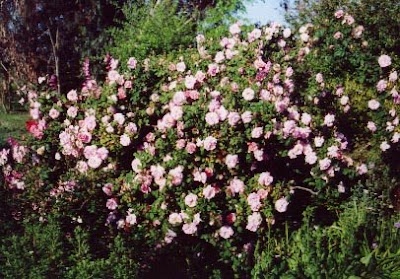 Liz
Posted by Liz Needle at 9:07 PM No comments:

In my last blog I proudly displayed some beautiful shots from the garden. Alas, since then the news has been pretty disastrous. Our glorious old flowering gum - at least 70 years old - decided to drop one of its very large limbs - right on top of my rose garden and across the drive. It took an age for the tree man to come and clean it all up, but I guess we have enough firewood for next year - leaves a very bare patch in the rose garden though.

A week later, down came another, higher branch. It is a very one sided tree now. We are going to have to get a tree doctor in to look at it, as some of the other limbs are looking rather unsafe as well. 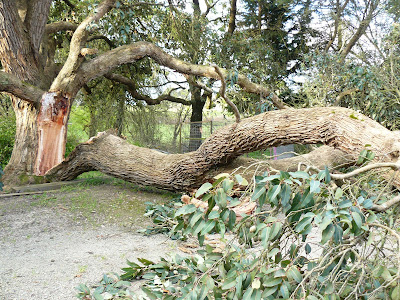 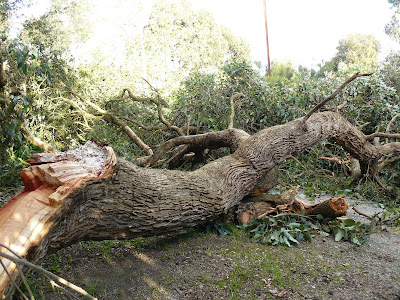 More garden disasters tomorrow when I get my camera organised.