Finally finished the blocks for the Web Challenge quilt and spent today trimming and putting them together - block by block, row by row, being careful to match everything up, get seams butting, blocks in the right position - you know the drill. Done it many times over. Checked it out with my spyhole and everything looked in place. Great! 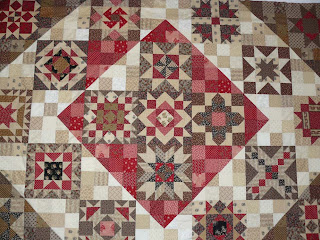 I couldn't believe my eyes. And I had checked it so carefully. Looked at it over and over.

So back I went and carefully unpicked what I had to and did it again, but what a bummer!!!

Below is the corrected quilt. Much better. Now I have to add sashing and borders, then get someone to quilt it. Too big for me to manage under my sewing machine. 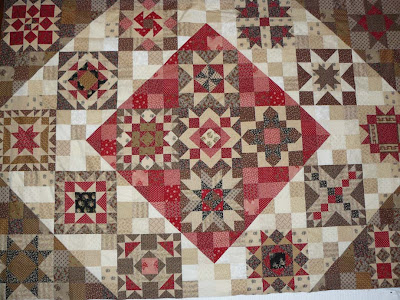 It's my first significantly red quilt and I rather like it. Not sure where to put it mind you as my house doesn't cater for red, but I am sure it will find a home.

Earlier this week we took advantage of the beautiful Spring weather and drove along the lower reaches of the Murray River. We had not done this for 6 months or so and wanted to see the deterioration since our last visit in Summer.

I guess for people not familiar with the river it doesn't look too bad - there seems to be a lot of water still, but for those living on and depending on the river, the changes are devastating. Even for visitors such as us, the changes are scary. Every year I take a group of Year 6/7 kids to Murray Bridge for an Aquatics Camp and we have noticed the receding water level over the past few years. Where once the water lapped the lawn verges of the camp site, now there is a stretch of sandy beach. The jetties and loading ramps are high out of the water and worst of all, the lovely billabongs along the river are dry, cracked mud. Where once there was abundant bird life sheltering on these quiet backwaters, now there are only birds in the willows along the banks and a few larger birds on the river itself.

It is difficult to see how these billabongs will ever fill again. It would take huge amounts of water from upstream to see them flourish as they did a few years ago. 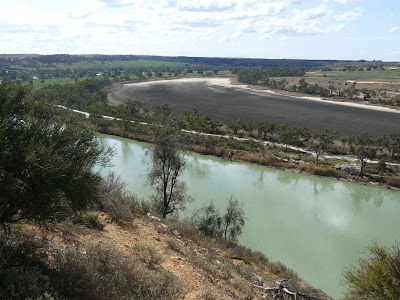 The large grey expanse was once water teeming with wildlife. Note the irrigated grain crops on the left hand side of the photo!

What horrified me most was seeing large areas of grain crops (barley or oats) being watered by large overhead sprinklers around Purnong. To me watering such crops is pure waste. But then, I am not an expert on such matters. I guess it's no worse than irrigating rice and corn in the middle of the Hay Plains?

Posted by Liz Needle at 5:20 PM No comments: 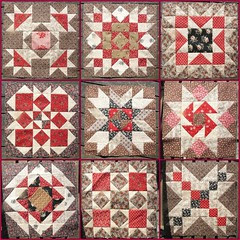 Web Sampler Blocks
Originally uploaded by lulubelleliz
These are the quilt blocks I have been working on this week. They are part of a quilt called 'Web Sampler Celebration #2', that was put out last year as part of the Shop Hop in USA.
They are a Civil War Classics range of fabrics by Julie Rothermel for Marcus Fabrics and I just fell in love with the range. My final quilt design is from Quakertown Quilts and I can't wait to see it finished.
Posted by Liz Needle at 5:50 PM 1 comment:

Hmmm,. You can tell I'm on holidays - I have time to spend on my blog. As you can see if you have visited before I have changed the colour and style. I like this green for a change.
Have to say I was disappointed at the size my 'wet' photos turned out with Mosaic Maker. Mine always seem to be small, whilst similar ones on other blogs seem quite large. Wonder why that is? So, I have decided to publish them again because I like them. 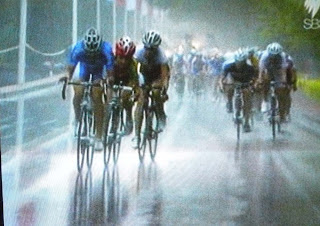 These are photos I took of the TV screen during the Women's Road Cycling Race in Beijing. 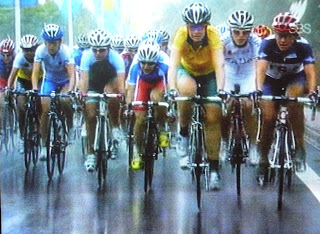 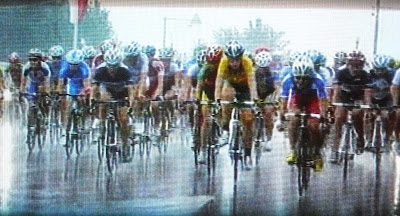 Wet
Originally uploaded by lulubelleliz
I am really pleased with these photos of the Women's Road Race in Beijing. I took photos of the TV screen and crossed my fingers. I like the reflections I got from the rain and the screen.
Posted by Liz Needle at 11:31 PM No comments:

For my birthday this year, my daughter, Jo, paid for me to attend a cheesemaking workshop with her. It was held in Angaston at the Barossa Valley Cheese Company and the workshop on making washed rind cheese was run by Carole Willman of Cheeselinks, Little River, Victoria.
Having purchased a new pair of clean rubber galoshes, unearthed an apron in the depths of my kitchen cupboard and found a plastic tub with two lids, I presented myself at the venue, ready to make cheese. Jo and I were introduced to the other 5 participants and Carole introduced us to the art of making cheese.
I won't go into details - hopefully the photos will do that, but suffice to say that it was totally fascinating and at the end of the workshop we proudly carried home our embryo cheeses with instructions on how to proceed to mature said cheeses over the next few weeks.
At home we had to keep our cheese at a constant temperature between 11 and 14 degrees until the mould started to show. The hardest part was actually maintaining such a temperature as it has been so cold and unless I put it on the mantlepiece over the fireplace, I could only get a temperature of 10 degrees anywhere in our cold old house. Next we had to wash and turn our cheese every few days until the washed rind culture became established (it was supposed to go reddish, but neither Jo's or mine did). Instead it started to go runny inside the rind, so I wrapped it in baking paper and foil and popped it into the fridge to mature slowly.
Well, mine is maturing! I'm not sure that it is maturing as it should, but it is sitting there doing something. It smells OK and tastes OK, but I'm not sure that it looks exactly as it should. Despite this I will purchase some cheesemaking supplies and try again, because it was fun and a challenge. When I actually taste my cheese in a couple of weeks, I will give you a taste report. Until then I check it regularly and give it more care than I did my children. LOL.
Liz
Posted by Liz Needle at 10:24 PM No comments: