October in the Garden

October in the Garden
Originally uploaded by lulubelleliz

There always seems to be happening in the garden - always something coming to life around each corner - apart from the weeds, of course. The winter and early spring bulbs and the camellias have just finished and now it is the turn of the perennials, the late spring bulbs and the flowering shrubs and trees.

Here is a selection of what is on offer at the moment in our garden.
1. White camellia 2. Miniature violet
3. Scabiosa 4. Iris
5. Peruvian lily 6. Malus ioensis

Some more 'broken' photos. Our place is just full of them. The trouble is that with me working full time and Don retired, but not very fit, we just can't get to fix these things - and to pay someone to do it is well beyond my means ( about $15 000 to clear away all the fallen willows!).

Thirty odd years ago 10 acres was fun - hard work, but fun. Now it is getting too hard. Trouble is that we have made this place so perfect (for us), that we can't bear to bite the bullet and sell up. Where else could we have the peace and solitude, the birds, koalas, echidnas and possums, the beautiful garden? Nowhere that we can afford, that's for sure! 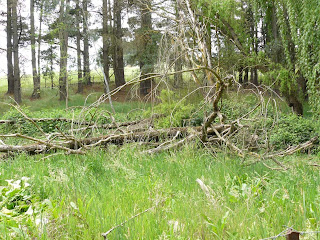 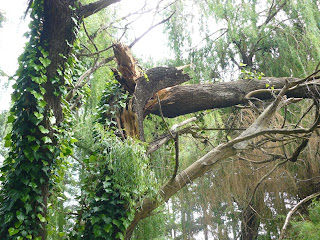 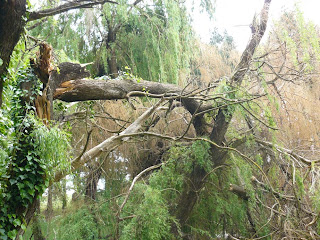 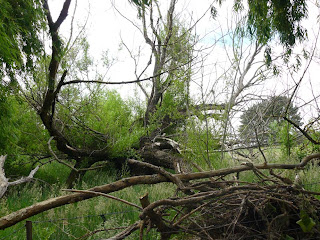 Scatterdays theme this month is "Broken" and I have tons of 'broken around this old farm. I'll sart with the old house - not the new one which was built around 1902, but the old one at the back.
When we moved in 37 years ago, we planned to do this old place up and use it as a B&B, but the architect took one look and threw his hands up in horror. It was built of cement and rubble - an old cheap method and the weather wall was sored up and covered with iron to keep the rain out. It could have been rebuilt, but at huge cost to us - poor struggling 30 year olds with 3 kids to raise and an old farm to re-fence and farmhouse to do up. So, the old house was left to die gracefully.

The blackberries have taken over the outside and the swallows, bats, rats and snakes the inside. 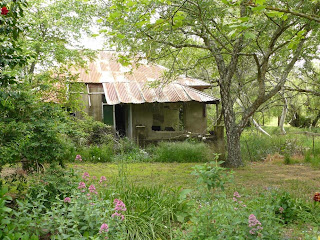 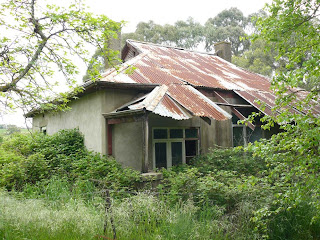 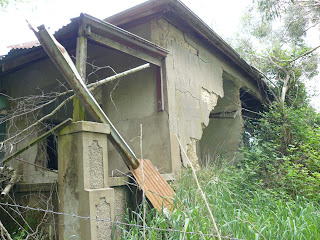 Liz Needle
Posted by Liz Needle at 7:32 AM 2 comments: 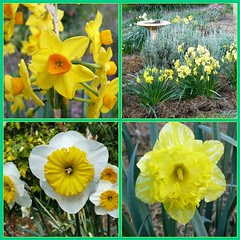 I mentioned yesterday that the bulbs have been stunning this year. Here are a few photos I took while the daffodils were out.

A pity in a way that they don't last until the bluebells are out. The blue and yellow combination would be amazing. There probably is a way of managing this, but I like things to happen in my garden without my intervention.

Below is another view of the garden. Last Friday the fog came in about 5 pm and I tried to catch it on film. It actually looked thicker than this in real life, but I still like the effect. 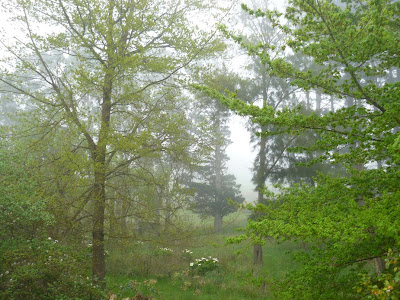 Posted by Liz Needle at 3:08 PM No comments: 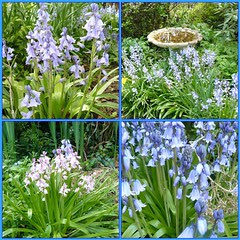 Don and I have been busy trying to get the garden in order. The drought and water restrictions were very discouraging and we let the garden go last summer. After a good winter the garden had sprung to life again and is looking quite lovely. The spring bulbs have all come up regardless of the drought - bulbs are so rewarding. They seem to forgive all.

The daffodils have all but finished and the bluebells are holding sway. The blue is just amazing, but unfortunately, the colours lose their splendour once they are photographed. The garden is awash with shades of blue at the moment. And the occasional pink clump. Such a satisfying bulb. No matter what you do to them, they flourish in the shady areas. I love them. To add to the blue we have babiana just about to flower and grape hyacinth and iris as well.

Soon the roses will wake from their winter sleep and the pinks, whites and golds will add to the spring colour in the garden. It will be interesting to see how the roses recover from the lack of water during the summer. We were amazed at the hardiness of the camellias (we only lost one) and the magnolias. Plants are surprisingly adaptable.

Posted by Liz Needle at 7:49 PM No comments: