This week's challenge is "What's on your Needles'? Any sort of Needles.

Well, here's what's on one of my Needles. My very long suffering Don Needle! 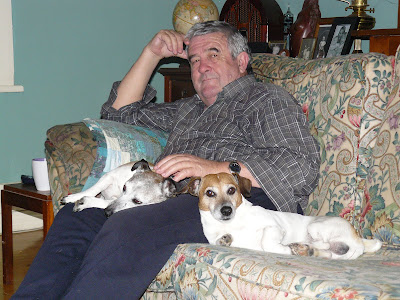 And more traditionally for a stitcher. A couple of my recent ATcs which were made for swaps. 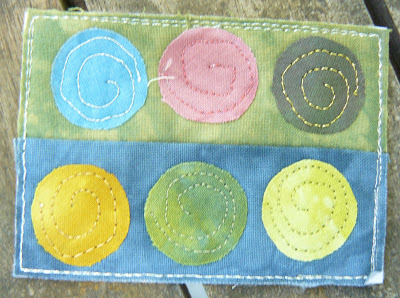 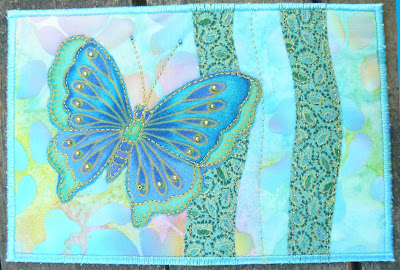 Found this fun activity on Lindi's blog and from there I went to Susan's. Looks like fun, so will join in - if I remember. Perhaps it will make me get moving on my blog.

What's on my.....? This week it's Desktop. Currently a photo of a beautiful flowering apple tree in my garden. 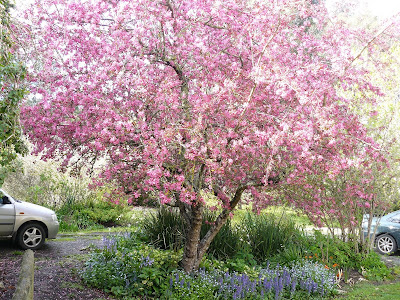 Great excitement last night. We had a visitor!! Not that a visitor is all that unusual, but this one got the dogs going mad, Don yelling to Mark to get the dogs inside and me racing for the camera.

Seen on our verandah at dusk - a red-bellied black snake. The poor thing was more terrified of us than the other way around. 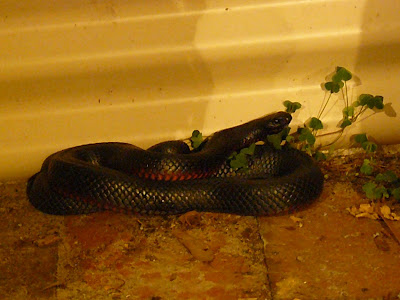 Ollie of course kept wanting to get back out there to tell the snake what he thought of it - from a distance thank goodness. It wasn't a huge fellow, but big enough to make a little dog pretty ill. We have a lot of frogs around our ponds at the moment and the snake was probably on his way home after tea.
And speaking of frogs. We finally have frogs eggs and tadpoles in our ponds. Very exciting!
Liz
Posted by Liz Needle at 10:39 PM No comments:

Funny, but we have had dogs ever since I can remember. When I was tiny we had a beautiful cocker spaniel called Trixie. When she died, my dad didn't want another dog for years, so we kids had cats, budgies, white mice etc instead. Then Don and I bought Dad a pup for Father's Day when I was about 19. He was a mongrel and we weren't sure how Dad would take to him as my father was really into pure-bred, quality anythings!
Well, he and the new pup got on like best pals. Dad named him Horace after Horatio Nelson (they both had a patch over one eye!) And, as my maiden name was 'Hornblower (I kid you not), the name Horace Hornblower had a certain appeal. After Dad died, Horace and my mother kept each other company for many years, though neither would ever admit to any show of affection. Eventually Horace disappeared one day when he was about 14 - possibly he found a new home, though more likely he found a spot to lie down and go to eternal sleep.
When I married and started a family, we had a variety of dogs - as you do - from rescued mongrels to pure-bred Dobermanns. My eldest daughter was (and still is) a sucker for any stray and we housed and fed many drop ins over the years as well as carefully chosen and much cherished long term friends. Not just dogs, but cats, ducks, geese, chooks, pigeons, cockies, finches, quail, budgies, canaries, tortoises, mice, guinea pigs, kangaroos, emus, donkeys, ponies, sheep, goats, rabbits, goldfish,. tadpoles, hermit crabs, pheasants, peacocks, guinea fowl, calves, cattle and 2 very lovely dingo puppies.

But in all that time I never actaually had a dog I could call my own - until Ollie! And he is very much mine - according to Ollie. He is a Jack Russell pup - now 12 months old and is probably the smartest dog we have ever had. He's very naughty, very possessive, very human oriented and totally captivating and very loving (my family say spoilt, but they still love him). Ollie does everything I do. he eats anything I eat. He shares the bathroom when I use it, he helps with the washing and gardening. He chases the bird seed when I throw it on the lawn and picks the vegetables with me. He is my shadow. He sulks when I am using the sewing machine or computer, but is ready for a game as soon as he hears the closing down music on the computer. 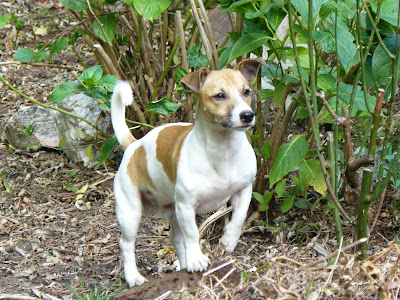 I forgot to say he is also very handsome.