Our sky is so grey today - rain!!  It's been raining all day. We've had nearly 40ml. The creek is flooded and the dam is filling up. Loving the rain, but I guess we won't have made much solar electricity today - well, you can't have it all, even in Paradise.

But yesterday was a beautiful autumn day and the sky was so pretty. 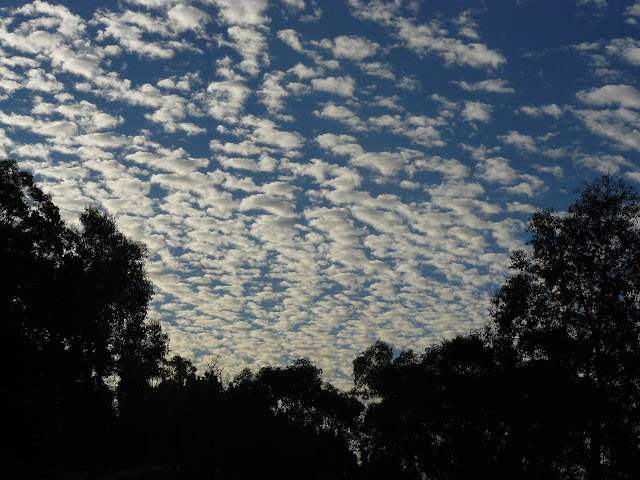 I'm a bit light on fences this week. Had a busy week and today it is pouring with rain.  Up to 4.00pm we had 25 mm (1 inch) with more to come. The side paddock is flooded and the dam is filling fast. Yippee!!!.

So, I have dug through my recent snaps and found a couple taken at home.  The first was taken through my kitchen window, through the fence around the verandah.  The birds are new Holland Honeyeaters in my birdbath. 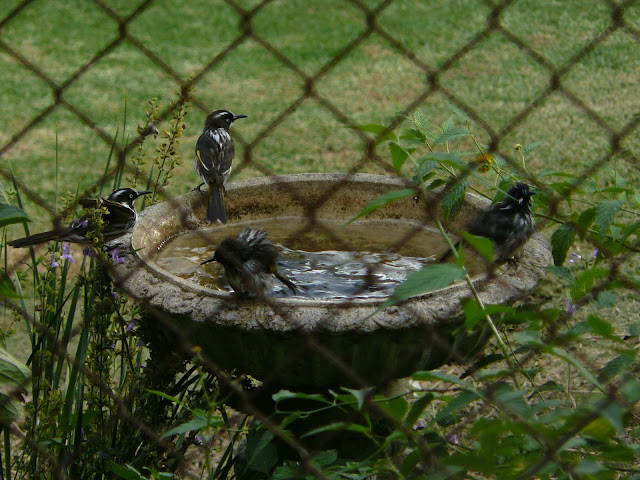 Mark has been chopping down huge old willows in the side paddock. Sad to see them go, but they were old and beginning to lose branches and fall of their own accord, so the decision was made to clear the paddock and revegetate it with more appropriate trees. These are a couple of the fires we have had this week. Willow wood produces a huge amount of fine white ash so it is not suitable to use inside as it leaves a white residue on every surface. 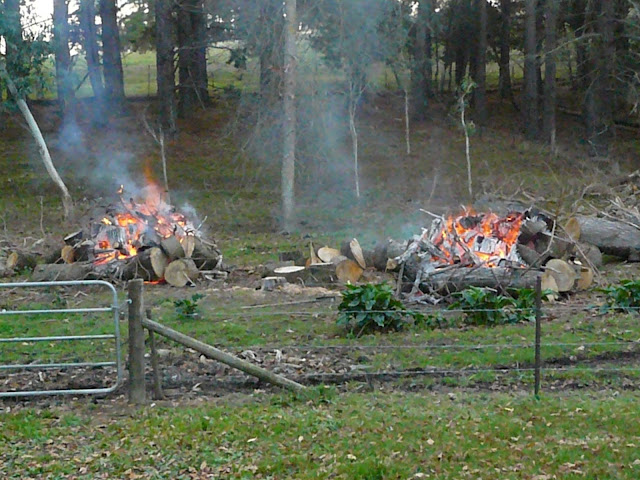 This is the last remaining willow. You can see how grotesque and ugly they have become. This one will be a problem to cut as it is leaning over the fence and likely to fall on the garden. 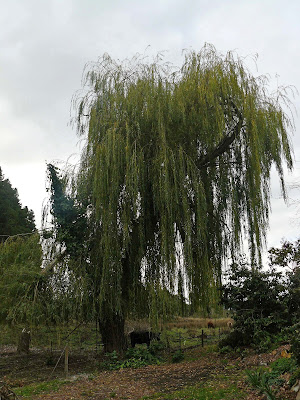 Hopefully next week I will have more time to look out for fences.

Close to home today. I was sitting in the sun this morning with a welcome cup of coffee, when I happened to glance into the fishpond - and behold, reflections. Nothing special - just observations.


I wonder if the fish can see reflections of us?

Sepia Saturday this week focuses on faces. From the face in the theme photo, it would suggest beauty, mystery, certainly female.  My family is not known for its beauty, but it is known for its women - strong, determined women, so that will be my focus because I like to use photos from my own collection if I can. Some of these women I have mentioned before, so bear with me if you will.

My great great grandmother Marianne Heyne (nee Tierof) had founded a school in Dresden after the death of her husband.  In 1851, with her daughter, she migrated to Australia to join her son who had migrated 3 years earlier. Marianne continued to do educational work in Victoria. 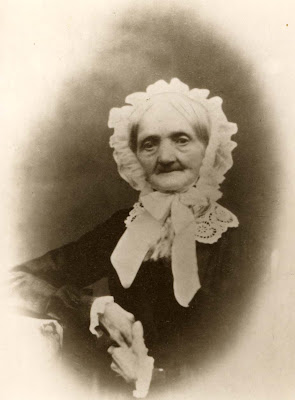 Three of her grand daughters became noted teachers in South Australia and taught for many years.

The eldest, Agnes, graduated from Adelaide university in 1891 with a Honours degree in Mathematics and Classics - she was the second women to gain an Arts degree in South Australia. She  married a widower with  3 children and then proceeded to have another 6. She raised this mixed family largely on her own as her husband spent a number of years in USA, coming back to live as an invalid in later years. She also combined motherhood with a distinguished teaching career, retiring when she was in her seventies.
﻿ ﻿  Laura Heyne, about whom I have written before, was the second Heyne sister. Because the family was not well off, Laura and Ida, the third sister were unable to attend university and attained their degrees part time while they were teaching.She achieved her MA in 1917.  Laura taught Mathematics, Chemistry and Latin, eventually becoming Senior mistress in these subjects at Adelaide Boys High School and having among her scholars Sir Marcus Oliphant and Sir Howard Florey as well as a number of distinguished Adelaide doctors, scientists and lawyers. Laura never married. 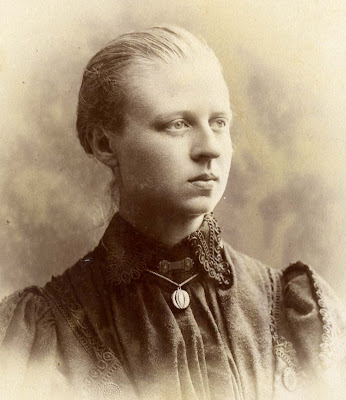 The third sister, Ida attained her degree in 1919. She taught German and latin for many years at Girton Girls School in Adelaide where she was a much loved teacher. She achieved a distinguished teaching career despite the fact that she became profoundly deaf in her late teens. As a child I did not have a lot of contact with Tante Agnes, but knewTante Laura and Tante Ida well as we lived next door. I was always a little scared of Laura, but was very fond of the gentle Ida. Ida also never married, but lived with her sister laura for whom she cared in later life. I suspect that Laura was never the invalid she pretended to be, but enjoyed the administrations of her compassionate sister.
Ida died shortly before her 100th birthday.

﻿ ﻿
The other Heyne woman who had an enormous impact on my life was my mother - Laura Wilhelmina Heyne, second daughter of Carl Franz Heyne who was the only brother of the aforementioned Heyne sisters. My mother, born in 1905,  was also a teacher and taught in a number of country and city schools before marrying in 1939. After the war, and with two small children, she dared to return to teaching, very much against the traditions of the day which expected married women to stay at home and care for their children. My mother taught full time until she was 69 and then taught part time with children with learning disabilities. She was an amazing women and a great teacher and I owe her so much.

Driving home the other evening and I just hapened to glance to my right. Nothing spectacular, just a peaceful view through the apple trees. I hope you like it too. 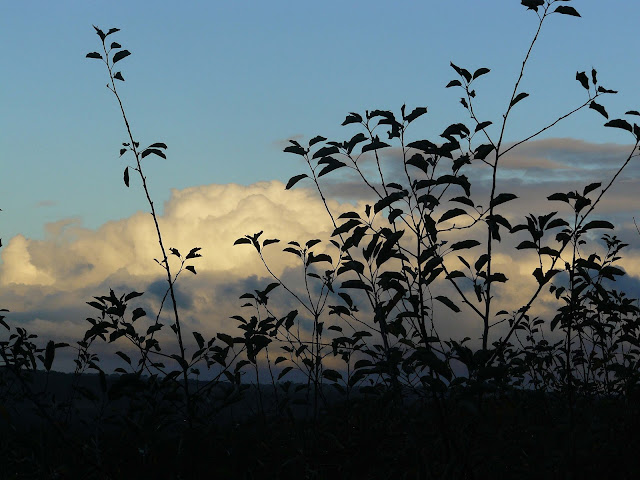 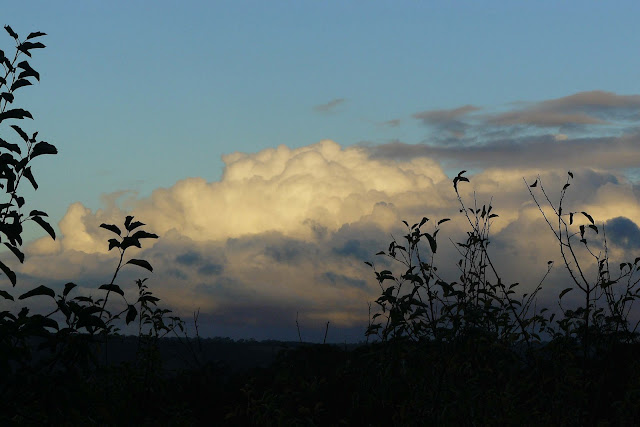 I missed last week thanks to a couple of bozo deliverymen who brought us our new washing machine, but also took out the overhead telephone cables as they came down the drive - no internet until we contacted the phone company - of course it was a Friday so we had to wait until Monday!!!

So, on to Friday's Fences. Something different this week. I found some quite interesting (I thought) gateways to share with you.

This one tickled my fancy. Why build a grand wide entry to a housing estate if all you are going to then do is put in posts so no-one can drive in. 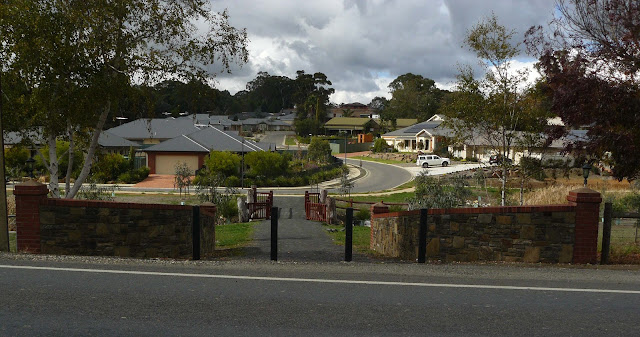 I love this cute little engine. This place used to offer train rides around a railway track, but I don't think it is open any more, though the entrance is still there. Well, maybe it is still open, though I have never seen anyone there. 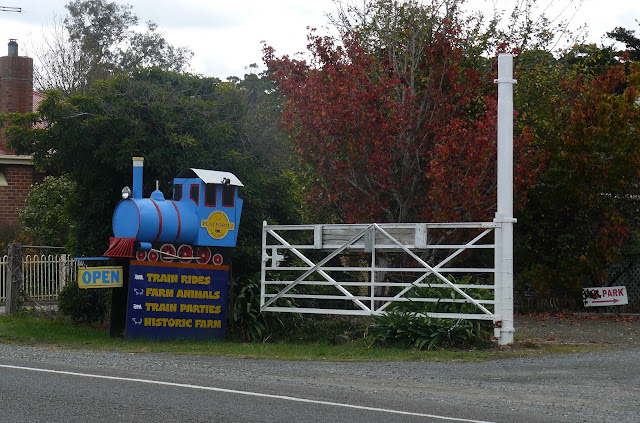 This property is in the middle of nowhere. Initially the owner had grand plans as he owns a company that produces these statues and this was going to be his showplace. Now all that remains are a few statues dotted around the paddocks and this entrance. 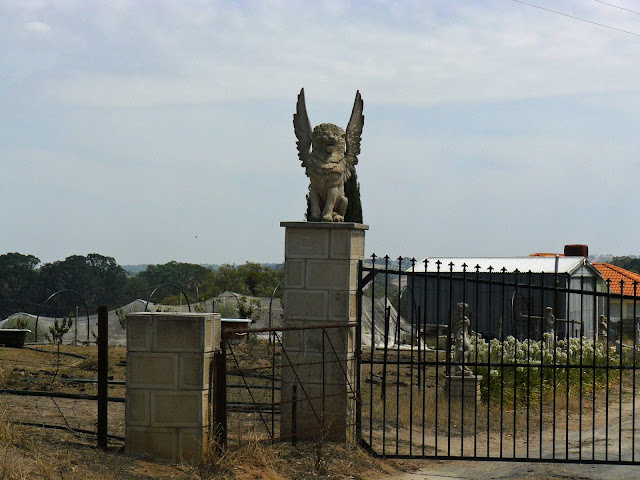 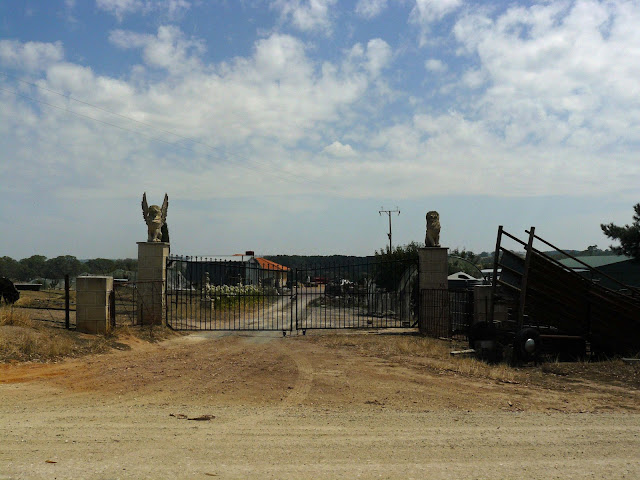 Finally.  Yes, Virginia there is a Fairyland. It exists in Lobethal, a little town in South Australia. 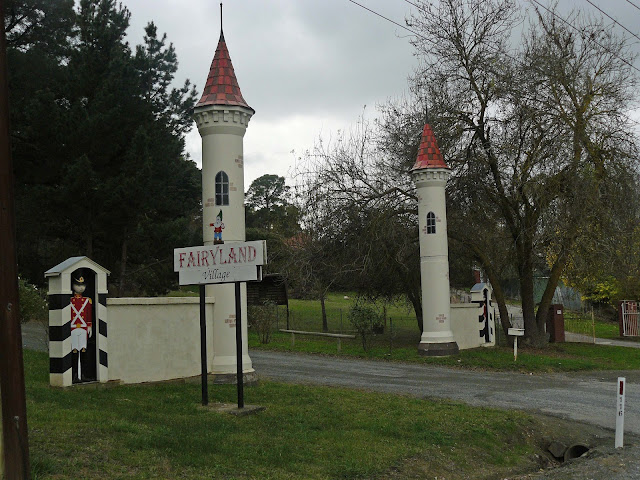 Well, I actually missed Sepia Saturday this week because I did not have any internet - a long story involving a couple of bozos driving a delivery truck down our drive without checking anything overhead and taking out our telephone cable!!!


So, because this is my favourite meme, I am catching up on Monday - thanks to the Telstra repairmen. 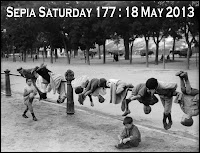 The theme photo this week shows kids hanging upside down. I couldn't find any inverted children  so decided to try to find photos of kids playing in my collection.  And I couldn't find any old ones - I don't think they were allowed to play while having photos taken. Instead I found some shots of kids (of all ages) playing up for the camera so these will have to do instead.
Early 1900s - this group of young men belong to a group called the "Yunglings Verem". My German is non existent, but I think it was a German youth group in Adelaide. 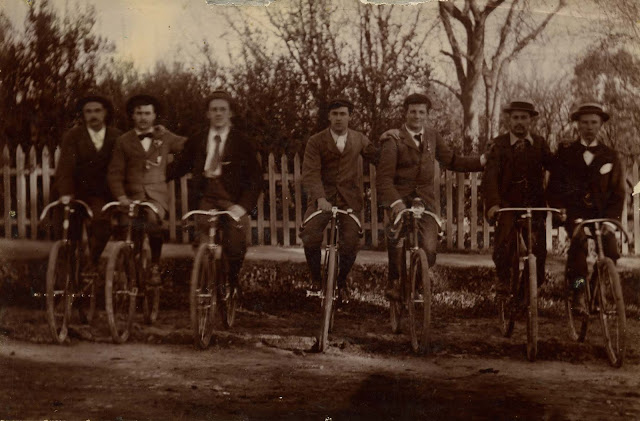 The Forties - and I got a camera for my birthday - a Box Brownie, which I still have. We went to Kangaroo Island for a family holiday and the tour bus broke down. So here we have "THE MEN AT PLAY".  Luckily I had my camera on hand!! How many men does it take to fix a bus??? 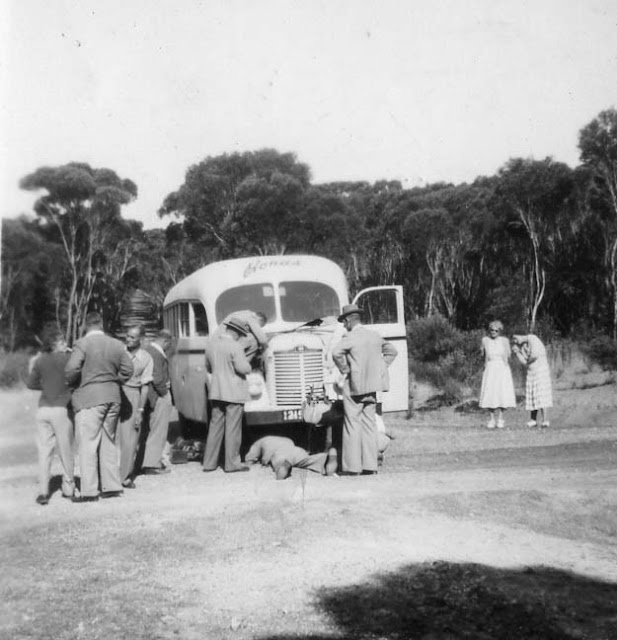 Early 1950s - Here are some of the street kids posing for my camera.  We lived in a new suburb and there were a lot of kids around my age. I would have been 11 or 12 , though most of these (except for the tall lad) are the younger children in the neighbourhood. The other older boys wouldn't be in it. 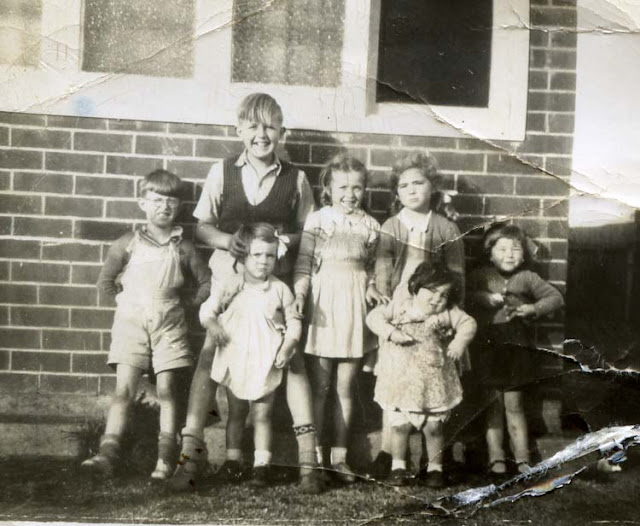 Late fifties - and I actually found an upside down photo. This one is of me at about 17. I was pretty keen on Gymnastics and I spent a lot of my time upside down whenever and wherever I could. 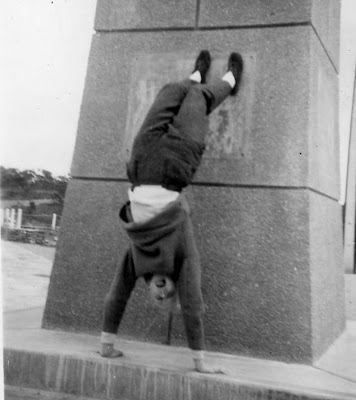 The Sixties - and I have matured a little. No more standing on my hands - Hockey is the name of the game now.  It's probably not difficult to work out which one I am. This was a practice game in Darwin. 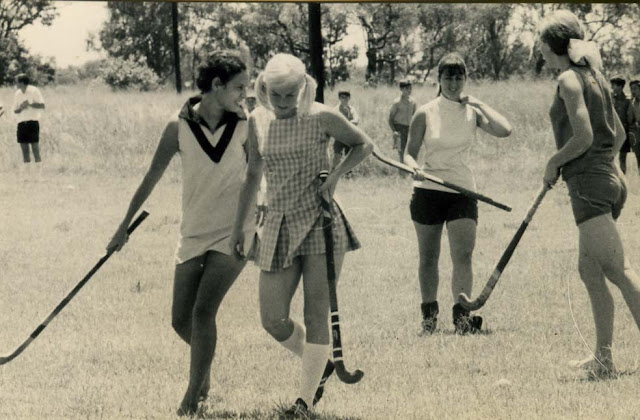 The Seventies - and here a few family shots. My husband is one of 6 boys and in the 70s they didn't get together much as we were living all over the place. So when we did it was always time for celebrations. This photo shows "THE LADS" playing up for the camera. 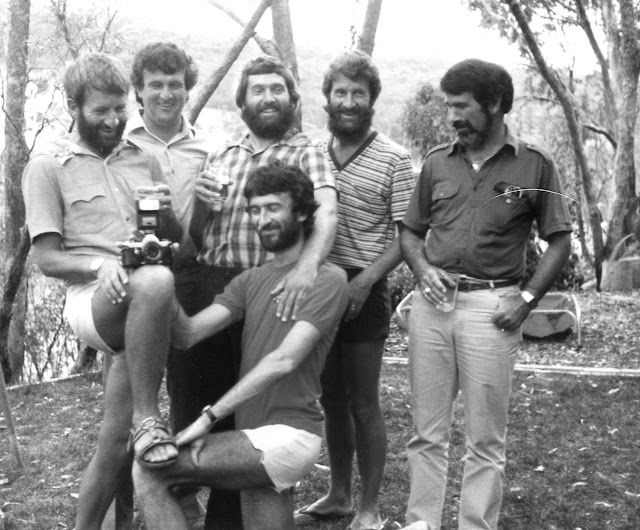 And of course "THE GIRLS" had to be in it too. 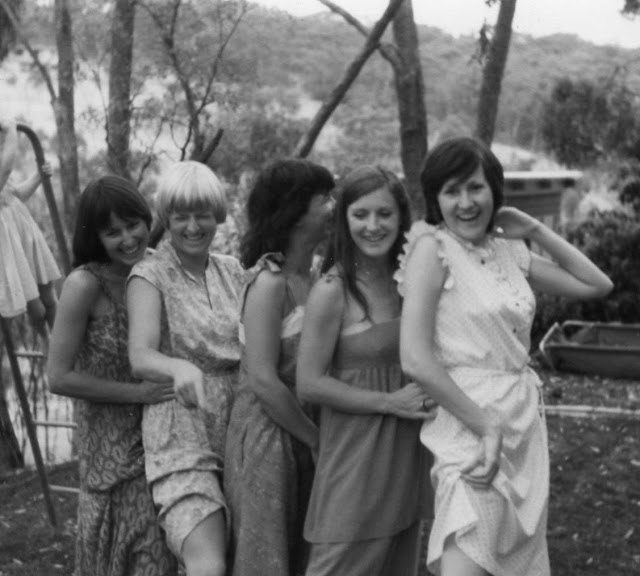 And of course "THE KIDS". 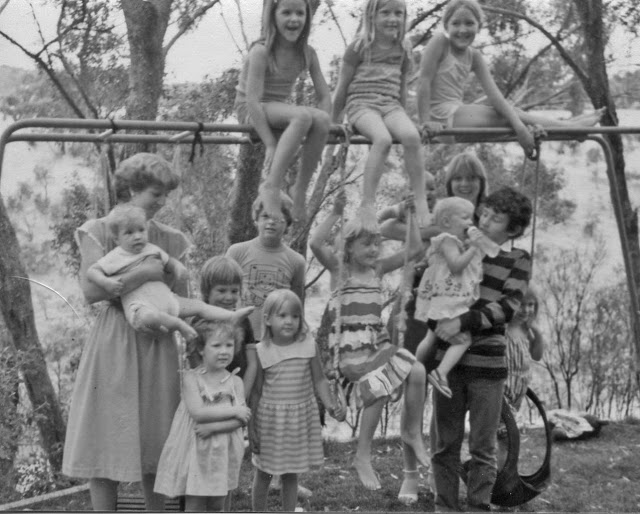 The Eighties - I just had to show this one in colour. High School kids having fun raising money for charity. 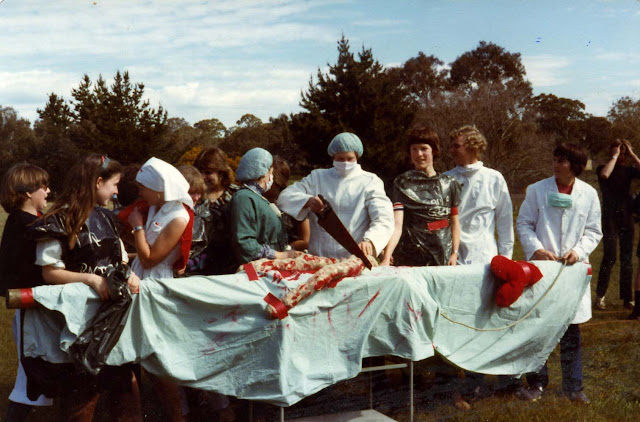 The Nineties - and of course it is never possible to take a serious photo when you get a group of adolescents posing, especially after a game of mixed football. 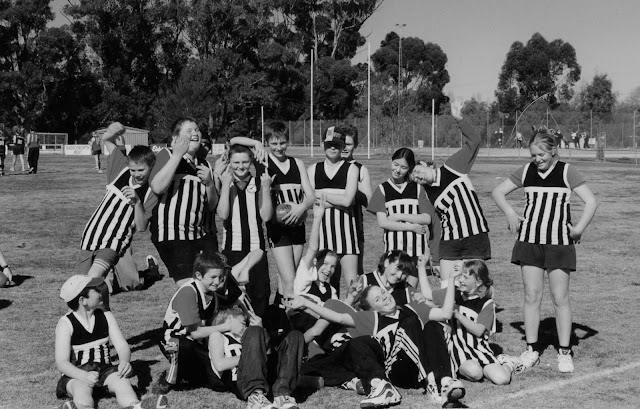 And so to the modern generation. Kids never change. The playground is still the favourite in the 21st century. 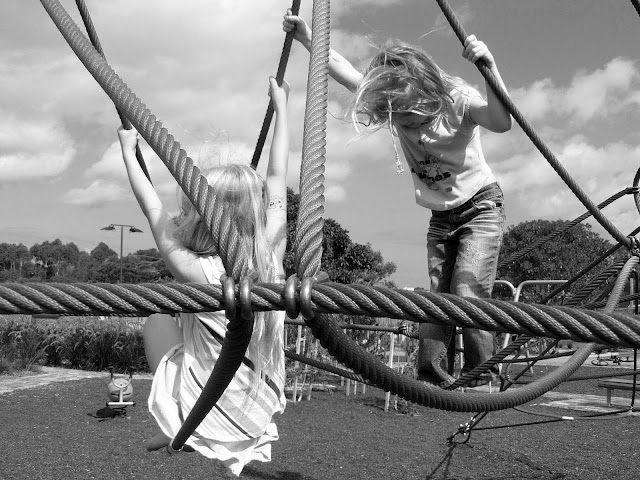 Thanks for visiting my very Late Sepia Saturday.

As a teacher from a teaching family I seem to have collected a number of school photos over the years - mainly formal group ones.

A little late this week.  I have been looking for hedges and there don't seem to be many around.  I remember as a child that there were a lot of beautifully manicured and sculpted hedges, especially in the more affluent suburbs. I guess in those day people could afford to pay to have their hedges trimmed. Some of them had the name of the property cut into the hedges, others had topiary figures on top of the hedges. Others were just perfectly maintained. It seems a pity that these beautiful fences are becoming fewer in the modern day.
I did find a few in my area, but nothing as grand as those I remember from my childhood. 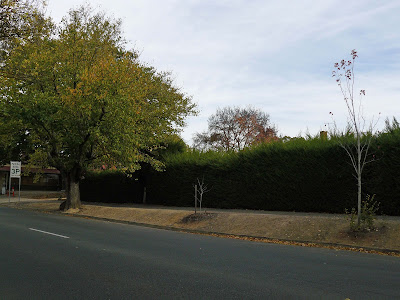 ﻿ ﻿ I am issuing a Hedge Challenge.  Can you find a hedge that rivals the old style hedges?Hhave you a decent hedge in your area?  Please post it.

Liz Needle
Posted by Liz Needle at 9:58 AM 5 comments:

We've all been watching the skies pretty anxiously for the past 24 hours. A few days after the Fire Bans finished, a bushfire started in a very inaccessible part of the Adelaide Hills and has been raging out of control now for 48 hours.
It is several years since we have had a major bushfire and those years have been very dry ones, so the scrub is tinder dry. So far only one house and several sheds have been destroyed, but a number of houses are being threatened and a little town called Cherryville is about 300 metres from the front.

The latest news says that the wind is currently in the firefighters favour, but they are expecting wind changes about midday. Tonight the forecast is for a cold front and rain, so we are all hoping that the situation holds off until then.