A New Thing to Do

On a fellow quilter's blog, I found a photo project called Fridays Fences, so I thought I'd join in. The idea is to take a photo of a fence or through a fence, so here is my first effort.  Although it is Saturday here, it is still Friday in USA - I think.

My fence is historically very famous in Australia. It is of the Dingo Fence, taken when we were on a trip to Lake Eyre. We took some very out of the way outback tracks and found ourselves at the Dingo Fence. It was originally erected in the 1880s to keep dingoes out of the south eastern part of the continent. It is the longest fence in the world at 5614 kms.

Not the best shot in the world, but it was taken with one of those old fashioned (non-digital) cameras and then scanned. Will do better next time. 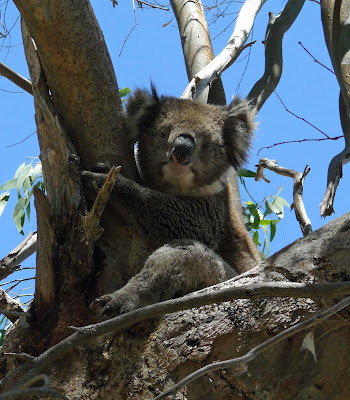 On November 28th we were involved in the Koala Count in South Australia. We were required to record any koala sightings on that day. All told over 1000 sightings were recorded , but this figure was probably lowewr than expected because we had a day of temperatures over 39 degrees.  Any self respecting koala would have been snoozing in the coolest spot it could find, not gallivanting about for silly humans to find.

Since then we have become quite obsessed with koala counting and regularly record sightings and photos on the Koala Count website.  Here are some of the photos I have been lucky enough to snap.

This beautiful boy has been around for a few years. We call him Kenneth and he is quite unafraid. He is distinguished by a white speckled patch on the bottom of his nose.


This is a younger fellow, lacking the white chin that Kenneth has. We have called him Kelvin. 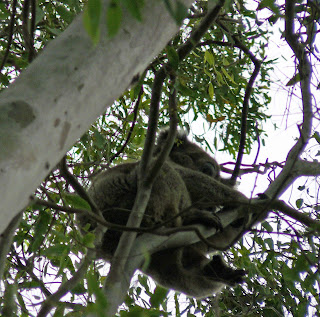 Kenneth again - or is it Kelvin. Not sure. Doesn't seem to be any white around his nose. Also seems to be a younger boy than Kenneth. 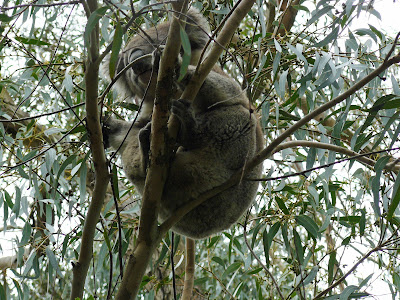 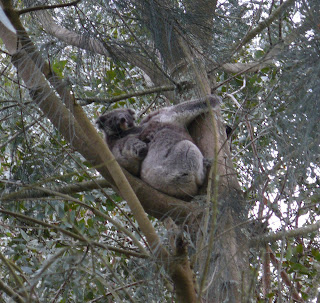 This female and her joey  have been in our garden twice that we have noted, usually in response to the very loud growling and calling from either Kenneth or Kelvin. 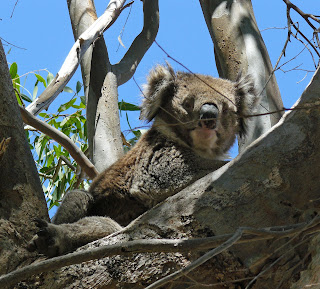 This is Kenneth again, You can clearly see the white under the nose. 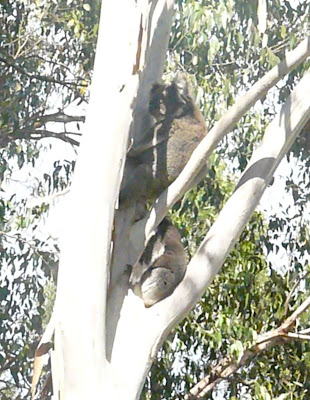 This mother and joey were spotted while I was driving to town. Quite unperturbed by a noosey woman and her camera.
Below is the mother without her joey. 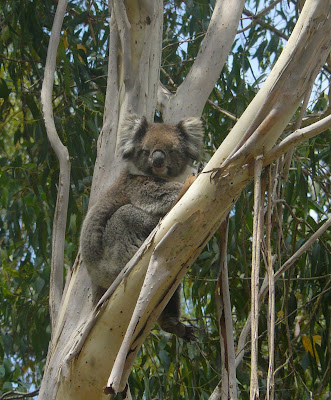 I hope you enjoyed our koala gallery.

I have joined the Scquilters Scatterdays group. Scatterdays is a bit like categories.  Every Saturday a letter and four different categories will be listed.  Scatterers have one week in which to find one thing for each category, photograph it and upload it to their blog.  The following Saturday surfers often cruise around to check out what you found.  After you have checked out other scattering blogs you can then start on next week's list..

This is the first week of Scatterdays and we have 2 weeks to complete the assignment.

The letter for this week is 'W' and the categories are:-

EXPENSIVE
MUSICAL
EXCITING
and a quilt related one
WIP  - for the uninitiated this means Work In Progress. (this might pose a problem as I don't actually have a quilting project at the moment - Quilters block!!!)

At least Scatterdays might make me get off my butt and do something with my blog. If you would like to check out what other Scatterdayers are doing, click on the Scatterdayers list of names.

Now to put on my thinking cap. Hmmmmm.