At last the Autumn rain has arrived - and none too soon. The garden is cheering - as am I. Very high winds in some parts have caused a lot of damage with fallen trees on power  lines and many thousands of home without electricity - but I am happy.

More garden visitors for you. This time it is the turn of the honeyeaters. Some, like the New Holland are very common and I have photos aplenty, but others are much more infrequent visitors - or at least seen more rarely and much more difficult to get any photos of, let alone good photos. I do apologise for the photo quality.

This New Holland Honeyeater likes to cuddle up to a tin flamingo in the garden. 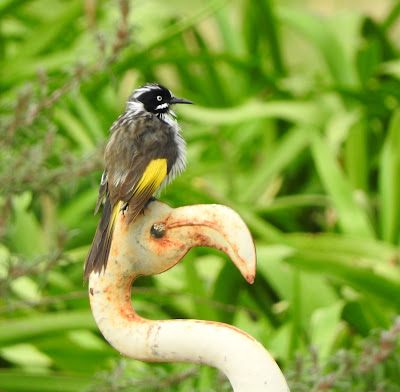 While this bare branch on the flowering cherry has long been a favourite roosting spot for a variety of birds. 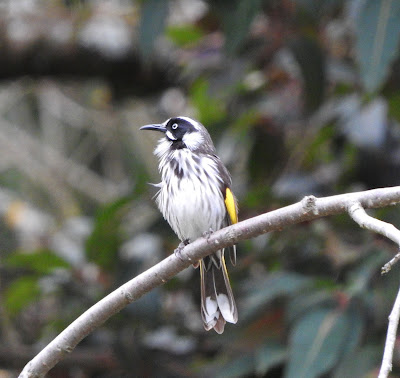 These fellows had a wonderful time in the bird bath one warm, dry evening. 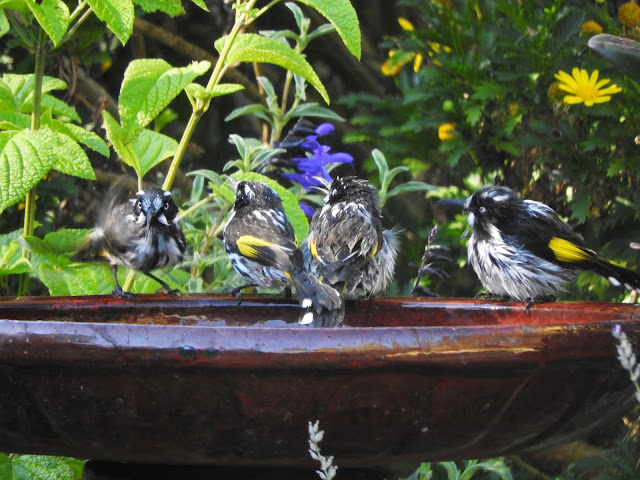 This is a Yellow-faced Honeyeater - we see him around, but he is shy and I have rarely been able to snap him. 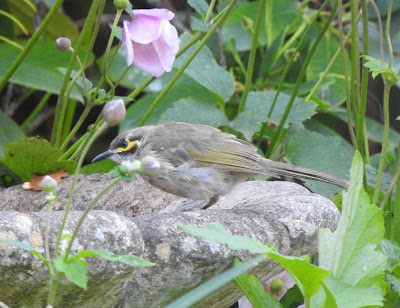 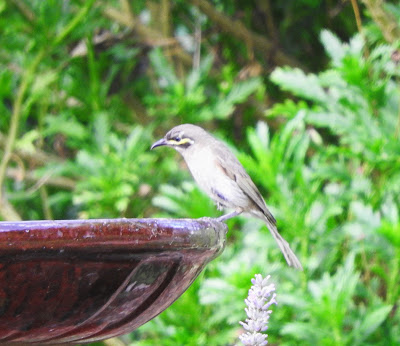 This year for the first time I have seen this one - a white-naped Honey eater. This fellow is a juvenile and is yet to get the characteristic black head of the mature bird. He is recognisable for the orange skin above his eye. We have seen a mature one, but as yet I have not been able to get a shot of him. 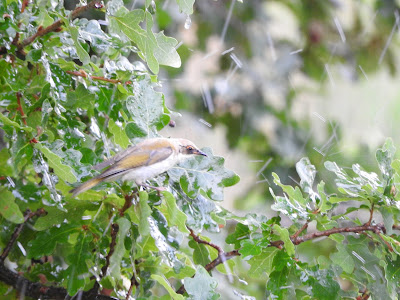 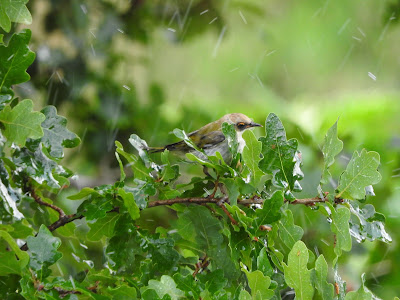 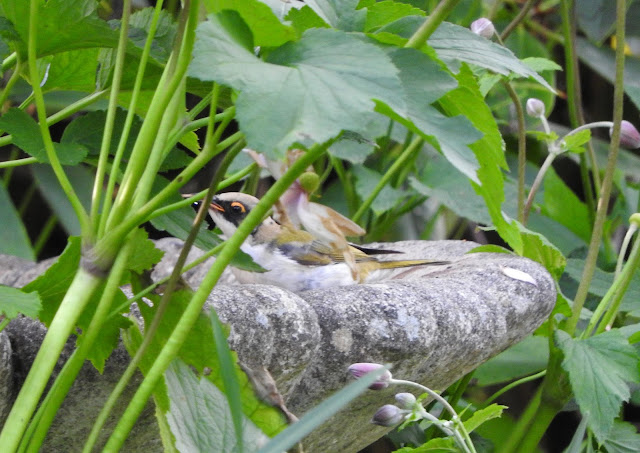 Meanwhile, on with the show.  This year we have seen so many little red-browed finches - dozens of them. Such pretty little fellows.

How many can I get in one shot? 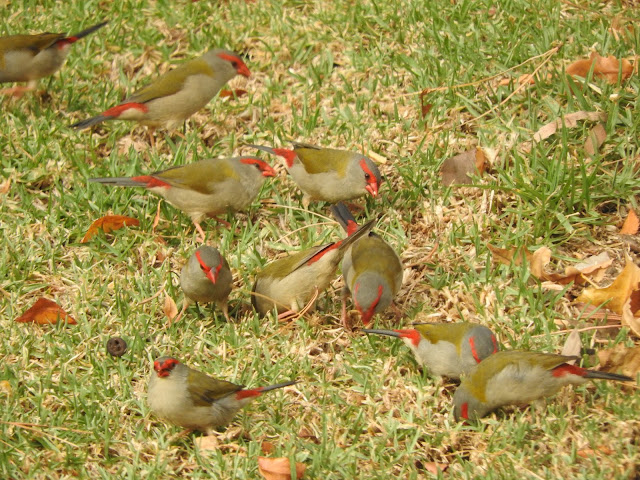 This little fellow seemed very taken with something in the bird bath. maybe himself? 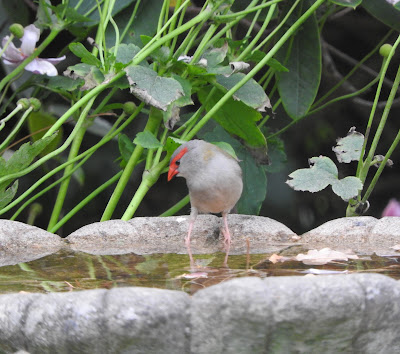 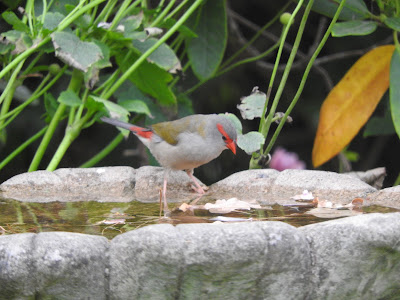 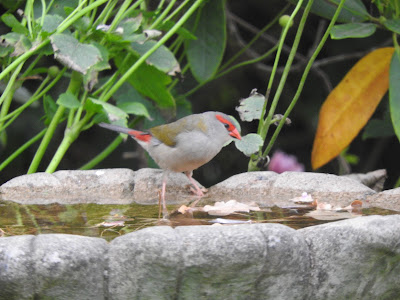 We have noticed that the finches are very interested in feathers - not just for their nests, but at times they seem to be playing games with them. One will find a feather and fly around with iit, pursued by another who will then steal the feather and play with it. Very funny to watch the antics. 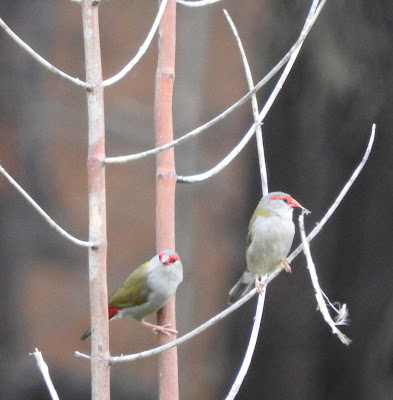 They are very fond of our wine barrel fish pond and will sir on the edge to drink, then hop onto the water lily leaves and walk across the pond. Unfortunately as soon as I get the camera out, they fly off. I was able to get a close up of this handsome boy. 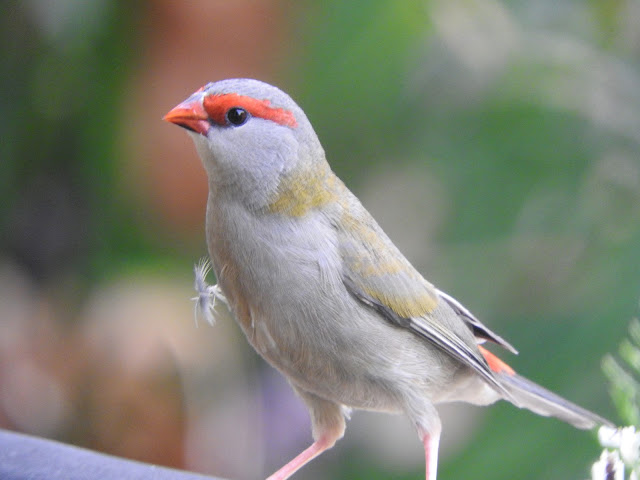 here we are well into April and we are still waiting for it to rain. I have been so busy keeping water up to the garden that I seem to have neglected all the other things I had planned to do. Now that Bowls is over for the season, perhaps i will be able to get on with it all.

One of the few positives to come out of this extended dry spell is that we have had an unprecedented number of birds visiting the garden - probably for the constant supply of water in the bird baths and   the extra seed we are putting out.

Each day we are visited by a family group of 9 Superb Fairy Wrens - one of them a little male who has gradually been getting his blue colour. We have had up to 40 red-browed finches at a time, numerous New Holland Honeyeaters as well as several Yellow-faced Honeyeaters and White-naped Honeyeaters and others which I am too slow to identify. For the first time in several years we have reasonable numbers of Sparrows and while they are not indigenous, we have missed their cheery presence.

We have had many other species as well, but the wrens will do for today. 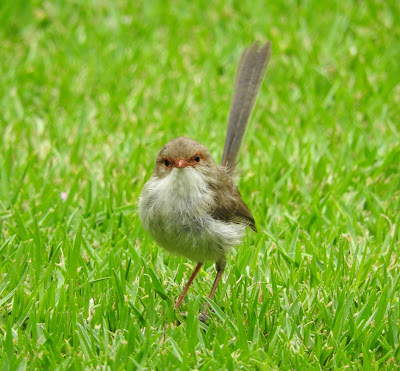 These feisty little females are my favourites. So cheeky have they become that they come right up to our chairs while we sit on the veranda. Unfortunately as soon as I go off to get my camera, they disappear!! I love the long spindly legs the youngsters have. 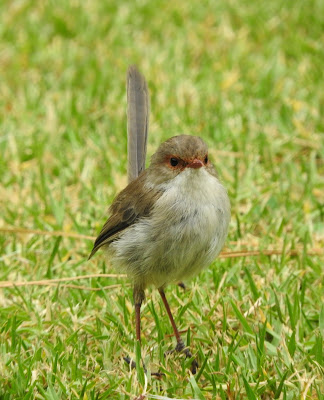 This is the little male who is gradually colouring up.  I was watching him last week as a mature male encroached on the front lawn. The youngster sent him on his way in no uncertain manner.

Here his colour is just starting. 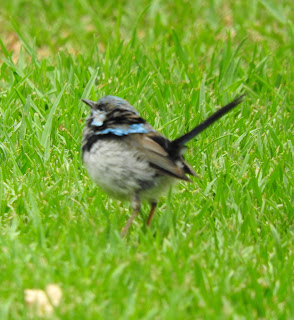 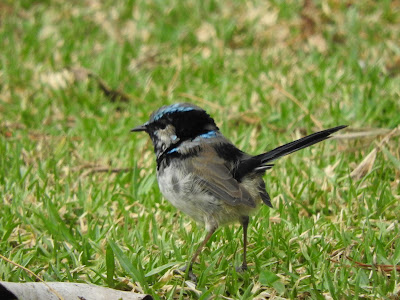 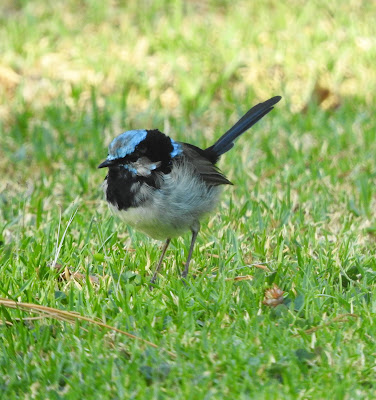 Below is the mature male who was sent on his way. 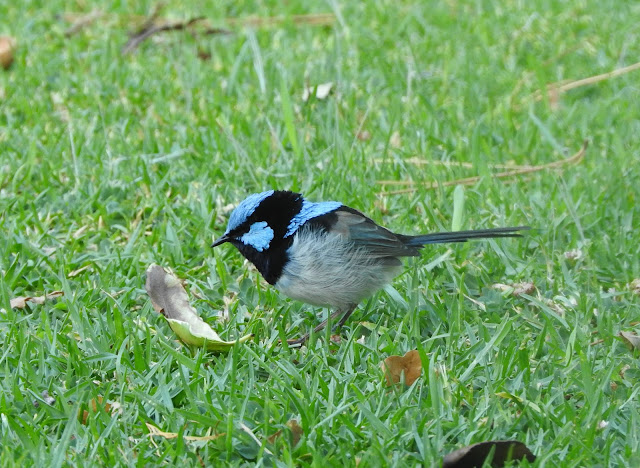